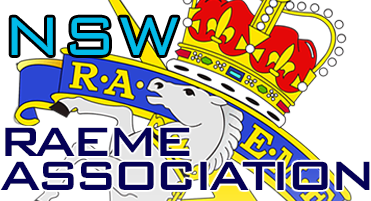 History of the RAEME Association NSW

THE AEME/RAEME ASSOCIATION. The AEME Association as it was originally called was established from the top down. It began in Melbourne on November the 2nd 1944, with a well attended meeting. The meeting formed the Melbourne Division, an action that some thought was putting the cart before the horse as there was no federal body in existence. This was rectified in Sydney in January the 3rd 1945, when Provisional Federal Council of AEME was founded. The objectives of the Association then are basically identical to our current Constitution.

The Federal Council endeavoured to encourage expansion but problems were encountered. In the 1940’s and 1950’s AEME soldiers who had spent most of the war in LADs or Field Formations tended to identify strongly with those units to which they had been attached.

Divided loyalties were frustrating for both the Corps in general and the Association, but as time passed other difficulties began to appear. Peace time establishment of the ARA was finally announced in 1947 and in 1948 AEME’s title was changed to the Royal Corps of Australian Electrical and Mechanical Engineers.

With the passing of the years the combined result of these events was that the new generation of soldiers became eligible for membership of the Association, but a feeling arose amongst them that it was really only for ex-service men and women of other days. The idea was strengthened by the fact that the title, the AEME Association, seemed to fix it firmly in World War II, at a time when modern craftsmen were serving in RAEME, a Corps with a different acronym.

It is believed that RAEME NSW Association was not really effective since 1946.

On the 3rd October 1972 Col D T Rennie then DDEME put out a call for a public meeting for those who had or were serving with RAEME, RAOC (Mechanical Engineering Corps), REME members of other forces of the British Empire, all members of the Australian Women’s Services who had served or were serving with RAEME or RAEME staff at formation HQ and Land Force HQ with all members of AMF who had been or were attached to RAEME irrespective of other Corps or unit identity.

The meeting was held on the 22nd of October 1972 in “P” Block Victoria Barracks and successfully reactivated NSW Division of RAEME Association. Sixty-eight people joined that evening.

“P” Block was symbolic because its walls have encompassed elements of RAEME over many years since the adjacent Articifers workshop came into being in the early 1900’s.

On the 28th of December 1972 Dick Wearne wrote to the Secretary of the Victorian Association, John Scott, seeking advice regarding how best to administer the Association and manage finances.

On the 23rd of January 1974 Col DT Rennie then Commander HQ 2nd EME Group wrote to all RAEME units advising that membership to the NSW Association was 160 and asking for members to join. He also advised the aims and Constitution of the Association.

He further went on to advise that the Association is organized as a Federal body composed of Federal Council, Federal Executive, and such divisions as are determined by the Federal Committee.

After the 22nd October 1972 initial meeting the first AGM to elect office bearers for 1974 was held at Parramatta Bowling Club Pitt Street Parramatta on Friday the 8th of February 1974.

The new association was supported by an energetic committee of members drawn from both ARA and ARES backgrounds. Locations chosen for Association activities included Homebush Depot (HQ 2 EME Svcs), Burwood RSL, Moorebank Area Sgts Mess, SME RAE Sgts Mess. The Association was fortunate to have the commitment of Capt Joe Marment and WO1 Michael O’Donohoe, who between them, led the committee and the activities of the association for over 25 years up to 2007.

In late 2004, HOC Brig McGahey CSC, raised the issue at the Corps Committee Meeting that establishment of a national association be investigated. The task of drafting the likely roles and responsibilities of such a body was initially floated to representatives of the HOC Group in conjunction with COL Comdts.

While initial progress was slow, events in 2007 which saw the launch of Operation Spanner Packs, had the effect of drawing the State and Regional Associations together in support of this project. (Operation Spanner Pack aimed to provide care packs – comprising of familiar foods, sweets, magazines etc. to every RAEME soldier deployed to overseas operations). While this project was launched by the NSW Association, operational responsibility was transferred to the QLD Association in 2009.

Thanks to the considerable efforts of the QLD Association and in particular, President, Raymond Norman OAM, the draft strategy document was prepared and disseminated to all state and regional associations. A final document was eventually agreed by all participating associations. The document gained approval from HOC in 2011 and Raymond Norman OAM appointed as the inaugural President of the RAEME National Association.

Each state and regional association has a representative as part of the National Association. Work continues to create a truly national organisation, complete with national website and Facebook media.